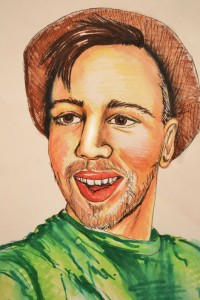 Kenny is a young multimedia artist originally from Bedford now studying in Leeds.

He believes any idea that develops must be realised and illustrated in as many different ways as possible in order to do it justice, whether this be through painting, creating short animated films or composing a piece of music.

Although he enjoys image making and creating a ‘piece’ he is more driven by the conceptual and meditative side of his practice as he spends a lot of his time learning and reflecting on the world, spirituality and what connects us all.

This acts as a huge influence on his work as a lot of what he produces acts as a live narrative on what he knows, what he thought he knew and what he’s trying to figure out.